Blockchain forms the basis of all cryptocurrency activity and is a term that 90% of Internet users have already encountered at some point. Odds are 100% that you have already heard of it somewhere. This article will help you get a basic understanding of what this term is all about, how it is changing our lives and how it can continue to do so in the near future. All this attention that blockchain is experiencing is due to the revolutionary role that it is playing in our society. This article is aimed at helping you understand the essence and concept of the blockchain, its role in the world of cryptocurrency, and hopefully, in a comprehensible language, we will talk about its uses in other areas of life. 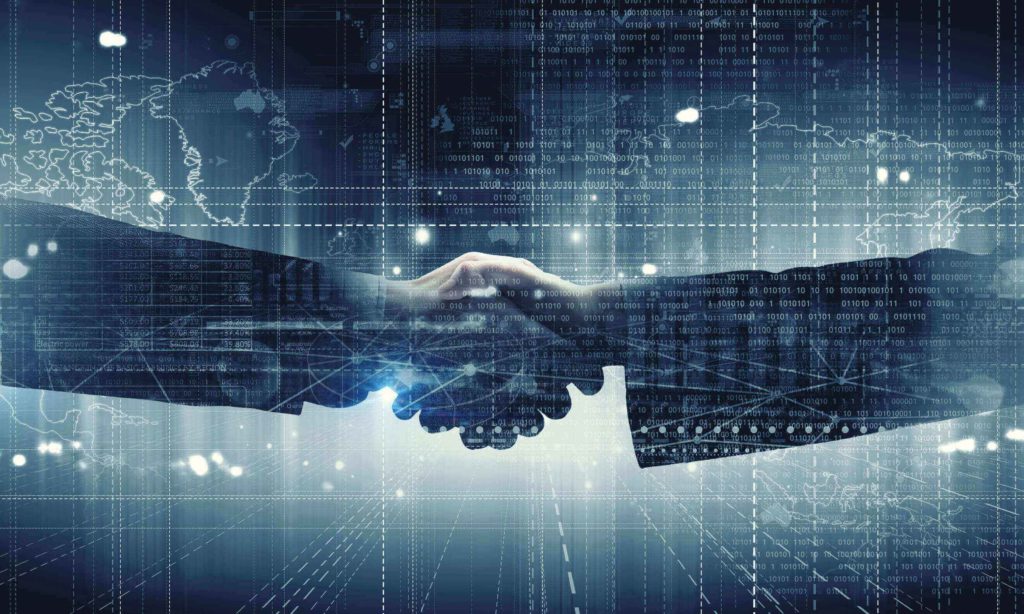 The tderm Blockchain itself partially describes its tasks and purpose. Completely self-explanatory, the “Block” part stands for blocks, and “chain” is for “chain”. Maybe that didn’t require explanation, but these words are used for a reason. As it turns out, blockchain is essentially a chain of blocks, but not just any chain. It is a chain that maintains a strict sequence.

What are these blocks and chains all about? Blocks represent data related to transactions and contracts within the system, presented in cryptographic form. Initially, the blockchain was (and still remains) the basis of the first breakout cryptocurrency Bitcoin. All blocks are lined up in a chain, that is, interconnected. To write a new block, it is necessary to sequentially read information off of the old blocks.

All data in the blockchain is accumulated and forms a constantly supplemented database. It is impossible to delete or replace any block within this database. Moreover, since it is unlimited – an infinite number of transactions can be recorded there. This is one of the main features and advantages of the blockchain technology.

The work of the blockchain can be compared to that of a torrent. Torrents basically work in a P2P mode (peer to peer), a computer network where all participants are equal. When we download a file from the tracker, we do not use some central server or storage. The file is directly downloaded from the same party members using the same torrent. If there are no participants in the peer-to-peer network, then you will not be able to download any files. Similarly, in the blockchain. All operations are carried out directly between the subjects, and they are carried out due to the fact that all participants are connected to the same network – the blockchain.

This technology was created with the advent of the famous breakthrough Bitcoin cryptocurrency. It happened in the year 2009. Satoshi Nakamoto is considered to be the creator and public face of the revolutionary and new virtual currency and blockchain. However, this person is mythologized in the world of cryptocurrencies. This is a pseudonym, likely followed by one or more people who have decided not to disclose their identity for obvious reasons. There is no doubt, that thousands of work hours have been spent on the creation of this ground-breaking technology.

There are two types of chains:

To summarize the key advantages of blockchain that we have already learned:

Before we consider the individual technical details, let us dwell on the design of the entire system. The sequence of blocks is a chain, not a circle or something else. Each block contains an array of specific data, and all of the blocks are interconnected. Therefore, a new array can only be created after an old array is closed.

Now we arrive at one of the main technical points – the formation and closure of blocks. Each link in a chain contains a specific key. Until it is decrypted, the block (link) will not close. How does this decoding happen? With cryptocurrency, this is where mining comes in. Cryptocurrency miners utilize the power of graphics cards and processors. Those, in turn, perform computational operations, the main purpose of which is to search for a cryptographic signature to the block in the form of a hash. As soon as it is picked up – the block is closed, and the miner receives a reward in the form of cryptocurrency.

Bitcoin or any another cryptocurrency is not stored in any file. Transaction information is stored in the global, publicly accessible database – the blockchain. It verifies and accepts operations on this large P2P network. The whole chain is distributed: it is supported by computers around the world. There is no central server to break or hack. The blockchain is public and very reliable at the same time, as it uses encrypted data.

The functionality of the blockchain and its security is ensured by miners and other participants of the blockchain. They are also referred to as nodes. Full nodes refer to miners and ordinary users with full-fledged wallets. This means that they have the full version of the blockchain on their computer or device. Its volume is constantly growing by the way. If in 2015 it occupied 35 gigabytes of memory, by the end of September 2018 it already takes up more than 185 gigabytes. Because of this, the number of full-fledged nodes began to decline.

The more active full nodes in the blockchain, the faster the transaction information is processed. The blockchain, it would seem, manages to combine the incompatible. It is very reliable and decentralized at the same time. All participants supporting the work of the chain are equal. There is no server or any processing center in play here. It turns out that the entire blockchain is not built on trusting relationships. For there is no guarantor of any kind, at first glance. However, each blockchain user acts as a guarantor of sorts. Decentralization of the network allows data transfer between entities representing different countries and jurisdictions simply by agreement among themselves. Directly, and without any intermediaries or regulators. The blockchain is built so that operations cannot be blocked. Hence, decentralization allows each user to feel safe and independent.

Blockchain technology and its features

Earlier we mentioned that the information stored in the blockchain is open to anyone. This means that you can see the transaction history and the way in which it was performed. Information about the size of the transaction is also available. At the same time, the identity of the addresser and the addressee is not disclosed for obvious reasons. This is what makes for the transparency of the blockchain.

Access to blockchain is gained by using special keys that guarantee the reliability of the entire network. Every user has a key. The key represents a set of cryptographic records. It is absolutely unique, which guarantees that data substitution is impossible, just as hacker attacks. To their goals, hackers need to gain access to all computers on the network, no simple task.

The mechanisms that ensure the efficiency and reliability of the blockchain are the algorithms of Proof of Work (PoW), and Proof of Stake (PoS), which confirm users’ shares. Thanks to these two algorithms, it is possible to reach a consensus in the blockchain, and thus, approve a transaction.

The Proof of Work algorithm is used in the Bitcoin blockchain. The mechanism works in a similar fashion to reporting in the office. Employees regularly compile reports to verify that they have completed a specific task. Without them, they will not receive their salary, as they did not confirm the fact that they have completed their assignments. PoW in the blockchain runs through the calculations generated in the process of creating a new unit. The following model is used here: the block is recognized as valid and closed, provided that its hash value is less than the signature required by the miners. That is, a certain cryptographic cipher shows the authenticity of the block. Playing the role of the auditors then, checking the authenticity of the block, are the nodes, or simple users.

Areas with potential for development and blockchain integration

Considering how the blockchain works, cryptocurrencies (both the popular Bitcoin and its analogs) work according to the proposed scheme. But this scope is not limited. Distributed data storage is of great interest for banking institutions and government organizations that provide general access to databases such as medical records, pension accruals, and many others.

Another big market with incredible potential for integrating blockchain technology is the foreign exchange market, otherwise known as Forex. Considering they are risky to an extent, with people sending funds through intermediaries like the CLS, a foreign exchange settlement service, and having their capital get tied up until a specific trade is settled, the foreign exchange market is accompanied by daunting, slow processes. With blockchain, comes the hope of providing practically real time trading and flawless execution speeds, two very important factors in this industry. Essentially, the game plan at the moment for many brokers and banks alike is to merge the benefits of blockchain technology for its speed and efficiency with other technologies related to privacy and security.

Blockchain allows you to store data in distributed structures, making it the ideal choice for many sectors. A few perspective directions for the use of blockchains include:

The preferential transition of private / state-owned companies to Internet technologies makes it possible to integrate blockchains into the existing infrastructure without visible changes.

You cannot ignore the tempting list of advantages that blockchain brings with it. As a matter of fact, the prospects that appear with the introduction of this technology at the global level are massive, to say the least. The desire to develop the economy inevitably leads to the consideration of new directions, and the new direction for the past few years has been blockchain.

Blockchain allows you to solve several problems at once:

Optimists predict exemption from corruption, the elimination of monetary fraud and other financial crimes in the long run, but a lot of works must still be put in to see any results. The transparency of the system will force all its users to comply with the law, seeing how all operations are open to the public. For the government, these prospects are becoming critical due to the fact that there is a lack of legally regulated schemes for the transition to blockchain technology.

In many countries, blockchain technology is often discussed at the state level. Somewhere talks are exclusively about bitcoins and altcoins, other states are trying to introduce it into their banking structures, including international transfers. Legally, this issue is far from being resolved everywhere, but slow and steady wins the race, and blockchain is being integrated across the world in one way or another.